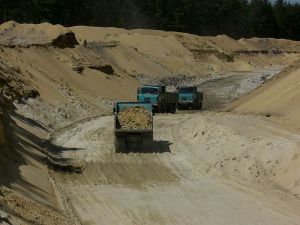 Even more than tabletop RPGs, I spent many years playing (and sometimes roleplaying) in MMORPGs. So term “sandbox”, as opposed to a “theme park”, means something very specific to me. Effectively, players get to create their own adventures rather than choose them. Think of children playing in a sandbox, building castles or having battles with dolls and army men or whatever. Or, in the other direction, they’re going to their favorite amusement park and choosing from existing rides and shows for entertainment.

In tabletop RPGs, a completely pure sandbox approach can create quite a bit of chaos for the GM. From the perspective of the facilitators for a collaborative storytelling process, we need some way of making sense of it all. And yet the players still deserve real freedom, not just the illusion of it. The 5×5 Method can help with this. Effectively, the GM will set up five tracks, each with five steps, and try to interweave them as much as possible. (Read some of the articles in that compendium, because this concept has far more nuance and ideas than fit in that tweet-sized sentence.)

WARNING: Lost Mine of Phandelver spoilers ahead.

Coincidentally, when Wizards of the Coast released the new Starter Set including the adventure Lost Mine of Phandelver, they made sure to include the five player factions early. This seems largely driven by the current Tyranny of Dragons story line. And RPG players love joining organizations that provide a sense of belonging in the broader fictional world. From a design perspective, factions do a great job of providing a little bit of structure for sandboxes. This gives players just enough direction to layer in with their backstory that they can have some purpose in deciding where to go and what to do.

So when we apply the 5×5 concept to the factions as we find them in and around Phandalin:

Clearly this isn’t the full 5×5. Some factions have more going on than others, and for some campaigns that might be okay. But if you have characters that affiliate with the Zhentarim or Emerald Enclave, you’ll have more work to do in terms of fleshing this out.

Enterprising GMs can take this and run with it based on what grabs their players’ interest. For example, the banshee Agatha can make reference to the city of Iriaebor as the home of a particular necromancer whose spellbook interests the Harpers for some reason. Maybe the Emerald Enclave could have a mission to that area as well, such as a message that needs to be couriered by a new recruit. Or perhaps the Blacktalons have some connection to the events in Phandalin, and the Zhentarim or Lords Alliance want that investigated.

We can generalize from this and structure campaigns using the 5×5 method by faction or organization. In other fictional universes, this might be by racial empires or something else. Not all of them need have player characters as members, either: you can have a faction pursuing its own goals in parallel. This should have an impact on the players, though, such as a recurring nemesis who always shows up at the most inconvenient times or perhaps some conspiracy that other factions want to uncover.

Combining factions and the 5×5 method can help GMs keep pace in sandbox campaigns that engage the players without making anyone feel either lost or railroaded.