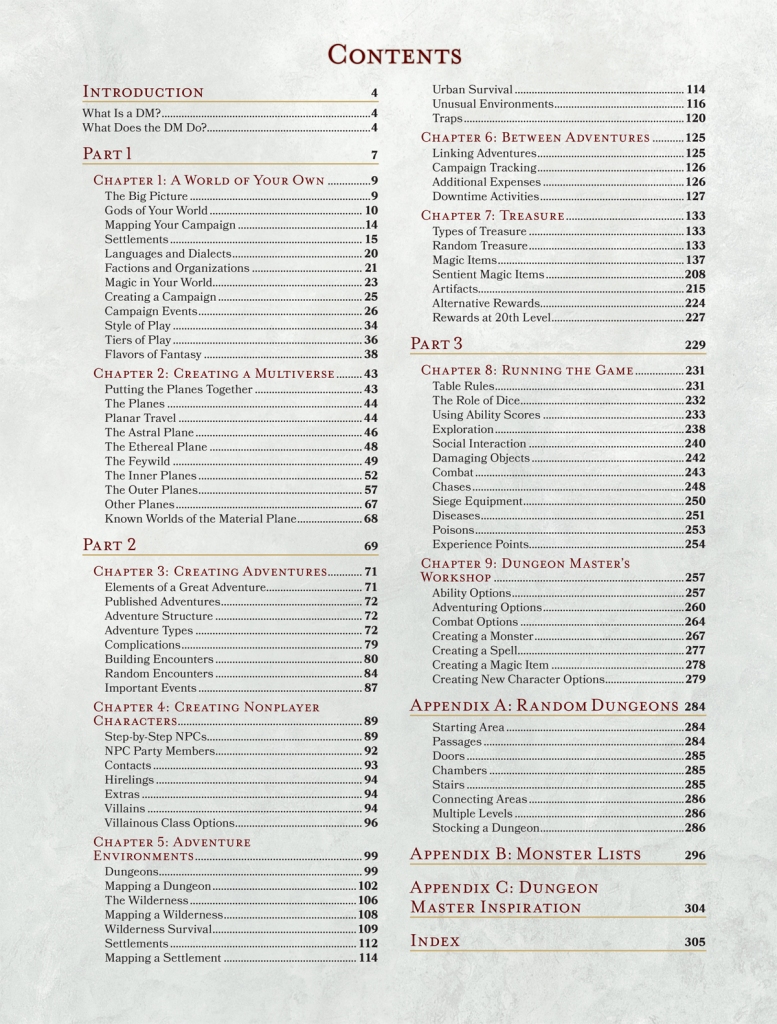 Wizards of the Coast released the Table of Contents for the Dungeon Master’s Guide as part of their participation in the Extra Life fundraiser this weekend. I’ve been anticipating this preview for some time, probably like most everyone else playing D&D 5e.

Looking at the contents

Even from just this table of contents, we can get a good sense of what WotC wants to accomplish here. Time to dig in.

Chapter 1 looks like something I will enjoy greatly. Others have written plenty of system-neutral and system-specific advice over the last several decades on world building, so I really want to see material that addresses it within the context of this edition in particular. Guidance on how to incorporate lower-magic settings, for example, will help me a great deal. And the pages on Factions and Organizations could help just as much with the setting I’ve started developing.

Chapter 2 will probably answer some questions for me, as I’ve never quite understood the cosmology of D&D. But it probably won’t occupy my attention past one or two read-throughs.

Chapter 3 again looks like most of the advice could apply to lots of systems. Perhaps some streamlining of the existing encounter building guidelines could show up here. For my personal style, I’d like to see suggestions on creating tables and generators rather than just a few tables that we will all hack anyway.

Chapter 4 should get into really system-specific advice. How do we build our BBEGs? What about guideposts / herald type characters, or the ‘dudes in distress’ that the party will rescue? As somebody who occasionally runs a solo game for my daughter, I will also appreciate the Hirelings section. The writers probably intend Villainous Class Options for NPCs, but that might come in handy for player characters in certain types of campaigns too.

Chapter 5 sounds generic. But if they had really excellent folks writing it, then it could serve as an excellent guide for building the environments in which we place our various encounters. A five-page section on traps pales next to Grimtooth but certainly belongs in the core material!

Chapter 6 will probably find its greatest value in the Downtime rules. This matters quite a bit for some activities like crafting and whatnot. Adventurers League games also use this feature quite a bit.

Chapter 7 has already had quite a bit of material previewed so I don’t have much to say about it here. Other than balanced rules for random treasure, not much will matter to me.

Chapter 8 reminds us that RPGs can do so much more than just serve as squad-level combat simulators. Looking at another world through the eyes of a fictional character inevitably leads us to explore it and meet other characters within it. D&D has always focused heavily on dice mechanics even for these things, though, so let’s see what the DMG has to say about exploration and social interaction. This also seems like a bit of a “miscellaneous” chapter, with rules for chases, siege equipment, and diseases & poisons. (Plus titling a section “The Role of Dice” is nice wordplay.)

Chapter 9 gets to the heart of what a DMG has to cover. What options make sense within the existing notions of balance? How do I create a monster and estimate its XP value and Challenge Rating? The section on Character Options also looks like it will matter a great deal.

Appendix A on random dungeons could go either way. Lots of generators already exist, like Donjon and even special dice. But more options mean more fun, particularly if the appendix here spends its time on creating coherent, thematic dungeons. The 4th Edition book Into the Unknown: Dungeon Survival Handbook contains a section on exactly this. An update of that material would really please me.

Appendix B hopefully contains the proper index to the Monster Manual and maybe some additional categorizations. Other players have produced a lot of that already, though, so I don’t know how much of it we will actually need.

I don’t see section headings here for some things I really want. That doesn’t mean they don’t exist, of course, because some of the preview material (like Firearms and Explosives) doesn’t appear directly in that ToC. But I really hope for official conversion guidelines for material from earlier editions. Guidance on older, non-Forgotten Realms settings like Eberron would also satisfy a lot of people.