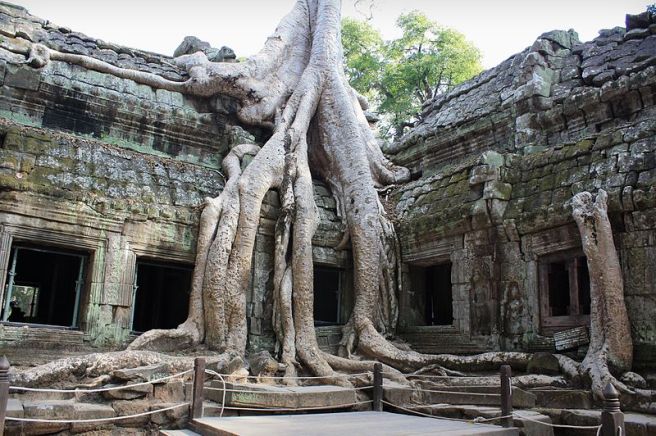 I don’t know why I keep forgetting how dangerous D&D Fifth Edition can be to level 1 characters. Last night I ran a small one-off adventure based on the Temple of K’thu’uk from Robin V. Stacey (of Microlite20 fame). You can find my conversion notes, including a new 5e monster, at the end of the post.

Out of the folks who signed up, four players came. “Kogrosh” the half-orc barbarian, “Tegid” the dwarven bard, “Leon” the tiefling rogue, and “Alston” the gnomish wizard.

I explained that the forested area around the village of Alston had originally belonged to a tribe of kobolds. As time went on, the humans logged the forest and turned the area into farmland, driving the kobolds further and further back into what remained of the forest. When the adventure begins, only a relatively small thicket remains. Humans who enter the forest to hunt (whether game or kobolds) sometimes don’t come back. The local sheriff has therefore offered a bounty on the kobolds to get rid of them once and for all. He noted that they have a primitive temple built into the side of a hill and that the adventurers should focus on clearing it out.

For the initial approach, I didn’t really use a battle map. I showed a top-down view of a forest and we just roleplayed their tracking, including several times when the barbarian thought he found a trap. At least once he didn’t find it, but he did manage to grab on the lip of a pit before falling in. For some reason, the use of traps by kobolds surprised them even OOC. Adventurers should never underestimate the opposition.

Once they arrived at the dungeon, the four kobolds in first room nearly managed in a TPK. In part, the dice just did not work in their favor and in part their tactics lacked a little finesse. Also, because the bard (and wizard) went down hard, they lacked any healing. After some difficulty, the remaining party members managed to stabilize them and they waited there in the entry hall for the unconscious folks to wake up.

While they waited, though, that gave me lots of opportunities to roll for wandering monsters. A couple of giant rats snuck in just as the bard awoke (while the wizard still lay on the floor). This fight ended up harder than I expected again, but I’d modified almost all the creature abilities to roll in the open. Everyone could see how the dice conspired against them. Then their greed took over and they tried to break off an arm from the jade statue of a kobold warrior. They all failed – the half-orc even fumbled. This resulted in another pair of rats coming to investigate and another fight that didn’t go the adventurers’ way.

They decided they’d had enough and, since the bounty had a 3-day completion, returned to town for the night to rest and buy some healing potions. Those cost a decent chunk of change for fledgling adventurers, so we roleplayed out some “aggressive negotiations”. Town guards wandered in before things got too rough, but they managed to get a significant discount. The wizard ended up using mage hand and minor illusion to shoplift one more as they left.

After reaching the temple again, they tried a more tactical approach. To avoid attacks from the rear, they barricaded some doors they didn’t use. The wizard then used disguise self to look like a kobold and they tried to lure out a couple who squabbled in the next room. But speaking in Common made the kobolds a bit suspicious, so one went to check and the other hung back a bit. When the barbarian cleaved right through the lead kobold, the other one fled around the corner and through a door to wake up a group of sleeping friends. These kobolds knew something bad had happened yesterday when they’d found the decapitated bodies of their comrades in the front room. Now the monsters had come back and invaded the large storage room! They lay in wait while the adventurers kept trying to lure them out. Eventually the dwarven bard kicked in the rotting door, stepped inside, and belched a thunderwave that crushed their little reptilian bodies. One by one, the group started to clear the rooms. In fact, at one point, they opened a door to find a scared little kobold quivering in a corner. The dwarf thrust his rapier right through it (“shish kobold”, I called it).

At one point rocks fell on them. But unlike what one player thought, the rocks came from winged kobolds Rather than a case of “rocks fall, everyone dies”, it simply consisted of another small ambush that wore the party down even further. In another room, alligators lurked in relatively deep standing water. Nearby lay a half-submerged dwarven skeleton. Of course, dwarves being dwarves, the bard rushed toward it, heedless of the fact that they’d just seen the alligators slip into the water when they opened the door. This resulted in the dwarf and half-orc getting chomped and pulled under. It took a bit, but the party made it through and recovered a +1 war hammer and a magic circlet from the dwarf.

In the next room, the rogue – and only the rogue – saw three kobolds hiding under the tables, but everyone saw more gardening implements. They’d already found wheelbarrows and similar equipment in other rooms. So one of them made a History check to see what they might know about this tribe. I explained again that the kobolds hadn’t really troubled anyone. They only defended themselves when the humans started trying to kill them and cut down the forest where they lived. The party finally got the idea that the humans had just hired them to eliminate the tribe because they viewed the little reptilians as vermin, not “people”. How odd that the tiefling rogue should have a crisis of conscience and decide not to tell the others about the scared little creatures…

When they reached a food storage room, they found more giant rats infesting the food supplies. As the rats had plenty of food, they made no aggressive moves towards the party. But when the party started to move on, the barbarian did what barbarians do and jumped in the middle of a pack of rats to hit them with his sword. For this, he nearly died and the party decided that the best course of action was to head back with the kobold heads they’d already acquired. Some discussion about possibly killing the sheriff ensued. I made it clear that a frontal assault on law enforcement in town would probably not have the desired result. Anyway, by this point the session had run for four hours and I wanted to go to bed.

They never really got to the kobold’s “god” in the center of the temple. They did, however, earn a bit of coin (much of which they spent on those potions of healing), some decent experience, and a couple of magic items. I invited all of them to join the Relic Hunters Guild with their characters, so hopefully that will provide a good lead-in and recruitment tool.

Most of this module requires little to no conversion. Almost every creature in the entire dungeon has an existing analogue in 5e except the eponymous K’thu’uk.

However, for K’thu’uk, I rolled up an undead kobold magic-user based on the flameskull in Lost Mine of Phandelver. Feel free to grab the PDF and use as you will. As noted above, the group didn’t get this far in the dungeon. Therefore I have not yet had a chance to playtest it.