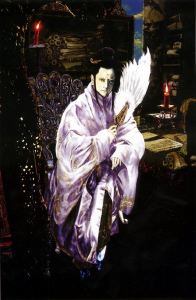 I started a new solo play “campaign” using Scarlet Heroes, this time sticking in the Red Tide campaign setting instead of using the adventure to build out a new city. This urban campaign will chronicle the rise to power of a Machiavellian wizard, the Imperial Ye Xue. I’ve already run his first adventure and will post it once I have straightened out the narrative a bit more.

IC: Xue comes from a merchant family and learned the trade of the scribe at an Imperial school. However, his teachers recognized his gift for geomancy and so he received additional training in magic. Xue’s family has never quite managed to achieve the level of commercial success they sought, and thus he has decided to seek his own fortune in the great city of Xian.

OOC: The trait “Long-distance runner” came up randomly, and when I re-rolled it, the dice insisted. So I figured I would go with it and see where it might make sense, but for now it just informs my sense of his build and physical carriage. I also decided to keep his Constitution at 10 but Strength at 8. He’s wiry and has good conditioning. Knowing a city magistrate will almost certainly come in handy. Mages don’t really need to buy much – they can’t wear armor and don’t need much of a weapon. I intend to run an urban adventure (at least at first), so he doesn’t need a lot of gear. Better save that gold for a time when he might actually need it (spoiler alert: good choice!).

2 thoughts on “Creating a Scarlet Hero”