I have a group starting Tomb of Annihilation in the next week or two as we wrap up a run through DDAL07-01 “A City on the Edge”. (That’s why I hedge on the date – it all depends on how long we take to finish the last of the missions.) The actual hardcover has a pretty old-school structure, it seems to me: a hex crawl followed by a very large dungeon.

The introduction, which itself sort of comprises a Chapter 0, does a lot of setup. In addition to the standard things like a story and NPC overview, it summarizes some of the checkpoints the adventurers will need to hit in order to complete the primary quest. The “Adventure Summary” (page 6 in the hardcover) gives you these, and you should immediately go make notes in the adventure at those locations and for those NPCs. Because ToA has something like a sandbox structure, DMs need to think ahead about how to nudge the players oh-so-gently in a useful direction.

Of course, it introduces the Death Curse itself and some hooks & quests to get the players started. Setting information like weather, races, names, and gods also appear. (This actually points up one small weakness: we’re told about mechanical changes during heavy rain, but I can’t tell how often that should occur.)

The rest of this post has spoilers, so watch out. Also, if you want a full set of notes, check out Power Score’s guide to ToA. I will be writing a lot more about this adventure, but probably not anything as great as that!

If only this adventure had an index… hrmm.

This chapter introduces the dynamic tropical port city from which the adventurers will get started, including ten side quests that DMs can use to guide players and provide a bit of extra experience and flavor. These include everything from local debt collection to pirate hunting to setting up major expeditions. A keyed map of Port Nyanzaru fills out a lot (and is useful if you’re running the DDAL adventures too). In fact, between the map, the list of NPCs (merchant princes and guides), and the various factions present here, you could probably spin this chapter into an entire mini-campaign of intrigue.

Adventurers in the port can shop on the black market or race dinosaurs. If they’re just betting on the races, the rules here are sufficient, but the racing itself is far inferior to what “A City on the Edge” lays out. If my players want to race again, I’ll probably spice up the mechanics from that module a little more and use that instead.

So yeah, a hexcrawl that starts off with NPCs, intrigue, and rumors? This definitely gives me good vibes. Depending on your group, you could probably spend weeks and weeks here. That doesn’t help with the Curse – in fact, it might even cause them to fail – but you could come back if they win. Or, you know, with new characters when the original party all falls prey to the machinations of Acererak. 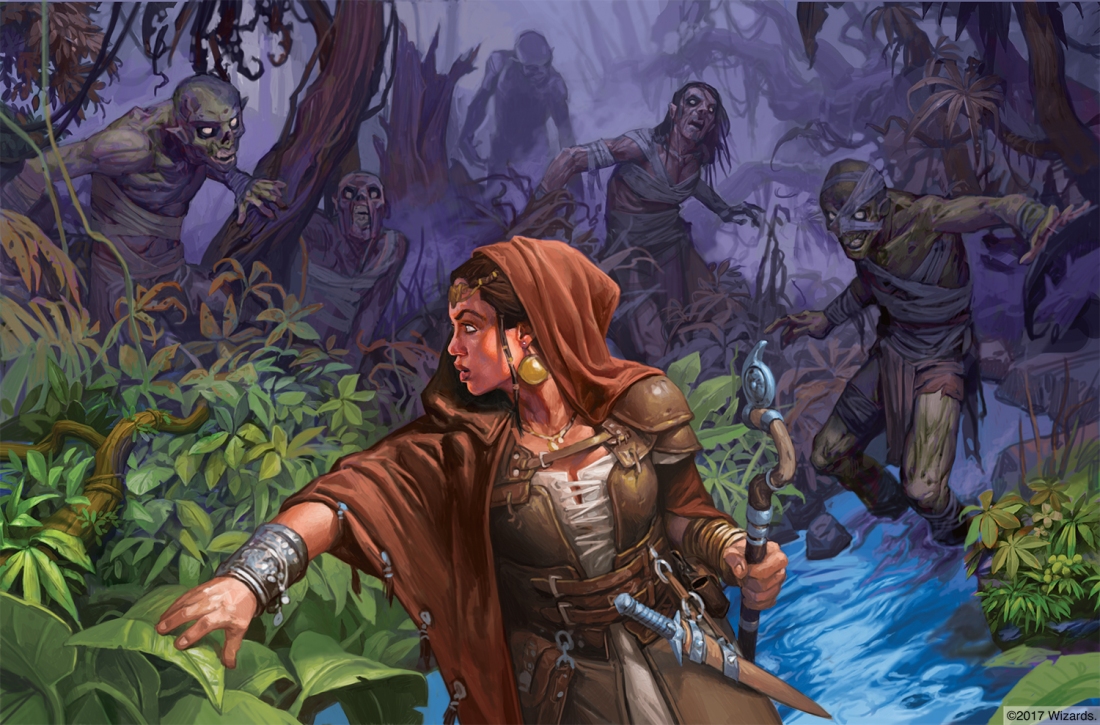 As part of the hex crawl, obviously we need two things: keyed hexes and random encounters. ToA has both, more or less. The hexes aren’t numbered like in many other products, but in my opinion that just makes it feel a little more organic. The main part of the peninsula has nearly 50 labeled locations. Some of those are just a paragraph or two, allowing the DM plenty of freedom to create. Some, however, are multi-page adventures in themselves with large maps, lots of encounters, and plenty to explore.

The random encounters here aren’t actually listed in Chapter 2 but in an appendix. Encounters have a 25% chance of happening three times a day, meaning it’s likely you’ll have at least one encounter per day.  Look at the terrain type, roll a d100, and you have your encounter with a paragraph or two of instruction. Since the party can normally only cover a hex or two per day, they’ll have plenty of company as they make their way through the jungles.

Those locations with scant detail are sometimes filled out by other adventures. The Snout of Omgar, for example, has one brief paragraph, but then the Tortle Package turns it into effectively its own chapter.

The last three chapters take an entirely different direction: zooming in very, very tight on the lost city that houses the eponymous tomb itself. That’s right: once the players find the actual city of Omu for which they’ve been questing all over, they’re only halfway done. Since they should be somewhere around level 5 at this point, and the adventure more or less takes them to level 11, you can see that in reality they probably haven’t even hit that halfway point!

First they have to contend with other folks in the city, and this includes everything from other expeditions to the dinosaurs and undead who still inhabit it. They have to recover nine keys (“puzzle cubes”) to proceed. The city includes puzzles, negotiations, combat, and poetic riddles. Players of all styles will find plenty to enjoy here, and that means DMs can tune the adventure and dial right into what the group wants.

Then they have to make their way through a yuan-ti temple. This is a tough dungeon crawl, but it’s a fairly standard one. Creepy enemies, factions and politics, lots of dungeon toys, and some real combat challenges (many of which can be bypassed with excellent diplomacy and magic). If they can survive this after the jungle, they will believe they’re prepared for the Tomb.

They probably aren’t. They’ll exit the temple back into the city, go to the Tomb, and make their way through six levels and 81 rooms. That’s not quite megadungeon size, but if you consider these three chapters together, you get pretty close.

The conclusion gives a sort of checklist in terms of treasures, plus a summary of what happens to a number of important NPCs after the conclusion of the Death Curse.

One thought on “Tomb of Annihilation: Thoughts on structure”