I recently concluded two long-running campaigns, both of which started in late 2017. After some reflection and discussion with the players, I realized that I could extract some lessons to improve my future role-playing games. This post isn’t really a review of the source material, just an overview of what I learned from running this campaign.

This campaign started in October 2017 with a group of players I’d already run through a mini-campaign (two large dungeons, “The Sunless Citadel” and “The Forge of Fury”) over the course of several months. We decided to play this book within the Adventurers League, taking mostly the same characters from the previous dungeons all the way up to level 16 or so on average. The campaign ran to 30 sessions at about 4 hours weekly. That’s a lot of D&D!

As noted above, this ran more or less parallel to the other campaign, and in fact for a while I ran “Tomb of Annihilation” at the same time. That means that, for the last year, I’ve been running at least two games a week. For much of it, actually, I ran three games a week. That feels like it was a mistake, in the sense that a smaller number of players and focusing more tightly on preparation leads to better quality. I like to prepare a lot, especially for games where I’m running someone else’s material. When my time didn’t get divvied up so much, we could do things like set up a “landing page” in Roll20 with review blurbs and a little layout of the characters. I tweaked the layout every week and never quite landed on one that totally made me happy. Most of the challenge came in trying to represent their whole entourage, which can get way out of hand later in the campaign. 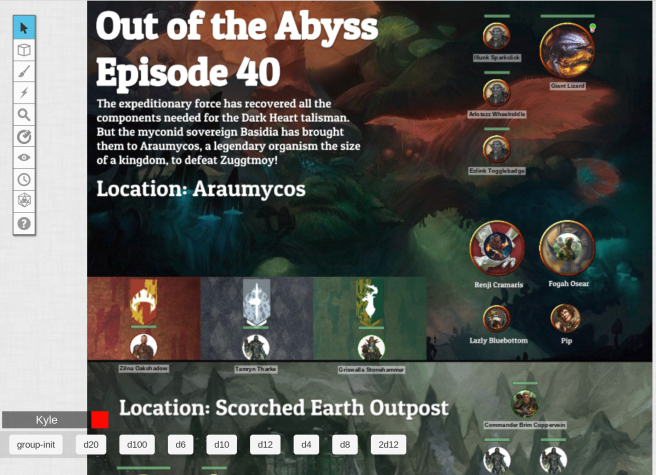 The game also became more enjoyable when we hit a better balance of combat vs social gaming. The first half of OotA focused more on combat with some social interaction (particularly in the city of Gracklstugh). In the second half, this split much more cleanly and that made it more enjoyable. Also, Roll20 makes exploration (as a D&D pillar) far easier than pure “theater of the mind”: dungeons and such become far more interesting and vibrant for me when we have a shared visual component. Other ways of visualizing these environments probably exist, however, and I’d like to explore those at some point, even (or maybe especially) if they don’t have quite such a tactical feel.

Survival horror, a key component of the early part of this campaign as written, only goes so far. Foraging and tracking supplies on an overland expedition turns out to be boring once the group has proven they have “solved” the issue. A druid with goodberry and an Outlander background (or, more specifically, the Wanderer background feature), can address many situations, plus spells like purify food and drink.

The largest problem with this particular campaign really was the absolutely terrible editing the book received. It felt like they ran out of time and had to send whatever they had written already to the printer because deadlines had arrived. The adventure has some fantastic scenes and ideas, but running it as written can really prove problematic.

For this campaign, I used a Google doc for all my preparation. That evolved pretty significantly over the course of the campaign, even before the Adventurers League change that eliminated experience points and gold rewards. I kept a running outlook over the next four weeks of what I expected they’d get to, plus a list of pre-rolled random encounters and usually a brief list of their rewards as they earned them.

I’ve since evolved my approach to preparation and tracking, so this approach feels a little outdated to me even as I write this. I’ll write up another one of these for my homebrew campaign, but this one has sat in my drafts folder long enough. I’ll give a little hint about the prep style, though: Trello.

4 thoughts on “Out of the Abyss campaign review”