Note: I originally wrote this post a few years back but never actually hit “Publish”. I’ve polished a tiny bit and put it out there because I really do like the product still today! 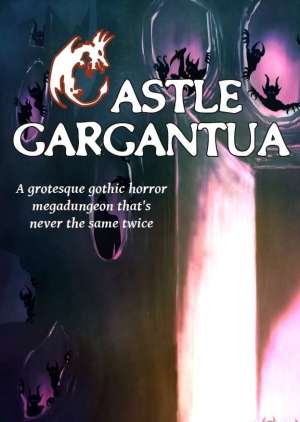 Castle Gargantua from Kabuki Kaiser bills itself as the “biggest megadungeon” in the history of the OSR. This is a little bit tongue-in-cheek, as one of the key conceits here is that the dungeon is built to scale for giants – so everything is six times human scale, or thereabouts. Whether other dungeons have more rooms and stuff, I don’t know, but this one is pretty large, regardless.

More importantly, the cover calls it “a grotesque gothic horror megadungeon that’s never the same twice”. Castle Gargantua provides a procedurally-generated adventure with little background. In fact, beyond the rumor tables, the GM is encouraged to let the players riff and make history up and then treat it as true.

As noted, the dungeon itself is procedurally generated. First, you follow a method not unlike Snakes and Ladders to figure out what themed area the players have entered. Within those areas, you generate several rooms on the fly, including monsters, treasures, traps, and “dungeon dressing”. The monsters have little in the way of statistics, so you could use this with any D&D-based game, from Swords & Wizardry to Fifth Edition (albeit in an “old school” type setup).

For the most part, this is all “theater of the mind”. That is to say, you don’t use maps – you describe the rooms and monsters, perhaps showing the players a few of the illustrations. One area, however, does include detailed maps drawn by Dyson Logos. He’s made a few available on his blog (1, 2, 3) but of course the book has more.

I purchased the PDF as well as the hard copy. The latter comes in digest size printed on matte paper, which is exactly what I want in my books.

I like the fact that it means whatever the players say it means. This collaborative worldbuilding and storytelling not only takes the load off of the game master, it means everyone feels a sense of shared ownership. Every group will create something somewhat different. And I suspect none of them will generate a high fantasy “Forgettable Realms”-esque environment.

In terms of the actual physical artifact, the book was printed on matte paper in digest size. I love this! It fits easily in a bag for carrying around, but still lays flat because the book only takes up about 120 pages (although see below). Lamentations of the Flame Princess may be the only folks who regularly get this specific thing right.

Oddly, the Table of Contents is missing the “Stone” section entirely. Page numbering errors also crop up from time to time, though they mostly don’t interfere. The organization of the book makes it sometimes difficult to find what you need. I’d have liked a more detailed table of contents, or optimally even an index.

And while this isn’t a major issue, the “Lust” section isn’t really all that scandalous. The two or three bits in it that could be even slightly controversial are easily excised. Depending on your group and tastes, this might be a positive. But it definitely doesn’t reflect the way the module was positioned.

Ways to use it

The first and most obvious is to use it directly as written: a megadungeon where play takes place primarily via narrative description (“theater of the mind”). Because of the focus on narrative play, this also lends itself quite well to a play-by-post or text chat setup.

Alternately, you can create artifacts as you go: produce an actual map of “your” Castle Gargantua based on your descriptions and rolls. The procedural generation might lend itself to this, particularly in terms of a point crawl. Almost all megadungeons (and dungeons in general, to tell the truth) work in a sourcebook form. Yoink out the items, monsters, traps, etc. that you want in your own game. (This is probably my favorite way to use something like this.)

I even think it might work experimentally for solo play or at least a GM-less setup, but I haven’t tried this.

In any case, while this book has been out for a while, the recent attention on megadungeons means it deserves some attention once more!

One thought on “Castle Gargantua”